Post-construction fish movement data from 2008 – 2010, compared with pre-construction baseline data from 2006 indicates that the Springbank dam is not a complete barrier to fish movement (Biotactic Incorporated 2006, 2008, 2009). However, it does provide some interference in relation to upstream fish passage.   It is important to note that the 2006 pre-construction, baseline condition had no stop logs in place.
Attraction efficiencies for all species were statistically similar in post-construction years to the values recorded in the baseline year. These values (reported as efficiency with 95 % confidence interval in parentheses) were:

The proportion of attracted fish that pass the dam should not be statistically different between pre-construction and post-construction conditions and this was not the case. Passage efficiency for all species was statistically lower in post-construction years when compared to baseline passage efficiency. Values indicate that fish passage was not completely blocked by the presence of the dam gates, but some interference did occur. These values (reported as efficiency with 95% confidence interval in parentheses) were:

Fish movement should not be delayed to the point where successful migration and reproduction are compromised. Individuals that successfully passed through Springbank dam were not delayed. When mean time for passage from all post-construction years is pooled there is no statistical difference between pre and post-construction years. The mean times (± standard deviation) for first passage were:

Factors external to dam construction such as mean air temperature and water temperature, water depth and river discharge, as well as genders and lengths of individual fish were recorded in pre and post-construction years. Statistical comparisons of environmental factors were made from the entire study period and one week after release of each species to determine their possible influence. It was concluded that differences in air temperature, water temperature and water level changes were statistically significant between each year due to the large volume of data collected. Mean air and water temperatures in pre and post-construction years varied by no more than 1 °C for the entire study period, and by 3 °C in the week following release (with the one exception of the period after smallmouth bass release in 2009) and had a biologically negligible effect on fish behaviour.
Mean river levels for the entire year (recorded just upstream of the dam by the UTRCA) were 30 cm higher during post-construction than pre-construction years. Mean depths during the week following tagging and release in post-construction years were 10 cm greater than in pre-construction years for all species. Mean flow conditions for the entire year (recorded 1 km downstream from the dam by Environment Canada at Byron) were 10 m3/s greater in post-construction years than during pre-construction years. During the week of release, white sucker, shorthead redhorse and smallmouth bass experienced mean flow levels in post-construction years that were lower than pre-construction years by 22 m3/s, 7 m3/s and 5 m3/s.
The apparent downward trend in fish passage at the Springbank dam may be related to factors other than the dam gates. Upstream migration by smallmouth bass is triggered by warm water temperatures and higher water levels; these were elevated in the week following release and may account for the reduced passage efficiencies. Upstream migration by white suckers and shorthead redhorse is influenced by daylight length, not water temperatures or water levels.
There was evidence in 2008 and 2009 that flow reversals and back-eddys created by the movement of water over the downstream lip of each gate may have negatively affected fish passage. In 2010 a sand wedge formed downstream from each gate that may have negated the back-eddy and flow reversal conditions previously observed. White suckers and shorthead redhorse were observed foraging on invertebrates that have colonized algae growing on the gates in 2010.
Refining statistical comparisons may require monitoring in 2011/2012 with larger sample sizes of radio-tagged individuals at the same time of the year as previous studies, if possible. These additional data are required to reduce the effects of unrepresentative study years arising from unusual environmental conditions or vandalism and refine statistical comparisons related to baseline fish movement conditions. The same species are recommended due to their different swimming abilities and migration times (see table below). 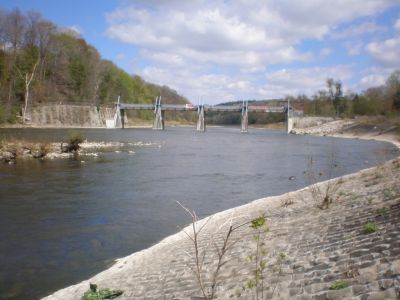