Most fish rapidly approached and swam upstream through the dam structure in 2006. Fish readily approached the dam in 2008, but white sucker and smallmouth bass were more delayed while passing through the dam. The mean time (± standard error) required for each species to pass the Springbank dam was:

Environmental factors such as mean river discharge, air temperatures and water temperatures at Springbank dam as well as lengths of individual fish were recorded in 2006 and 2008.  Statistical comparisons were made from the entire study period and one week after release of each species to determine the possible influence of factors external to dam construction.  It was concluded that air and water temperature changes and water level changes were significantly different; however air and water temperatures had a negligible effect on fish behaviour. River level changes reflected different river flow conditions in 2008 compared to 2006. Other water level factors such as hydraulic conditions over the new dam gates did vary over the course of the study due to gate testing and the north gate failed to open fully and did not lie completely flat on the river bottom as designed.
Further monitoring is required in 2009 and perhaps 2010/2011, with larger sample sizes of radio-tagged individuals if possible. These additional data are required to refine statistical comparisons related to baseline conditions.  During monitoring, as many factors as possible must be kept constant related to Springbank dam, as well as capturing, handling and release of fish. For example, releases of radio-tagged fish should be conducted under similar thermal and hydraulic conditions, at similar dates and times each year. Dam gates should be lowered as much as possible and remain lowered throughout the study period (except for testing purposes outside of peak periods of upstream fish migration). Upstream fish migration occurred slightly later in 2008 compared to 2006 due to variation in natural environmental conditions.  Some variables, such as river flow, water temperature, and mechanical malfunction are somewhat unpredictable, and control of these dynamic factors will remain a key challenge for this monitoring project.
A comparison of the data sets from 2006 and 2008 shows statistically, or mathematically significant differences regarding attraction and passage efficiencies. Observations made either directly or videographically suggest that the biological significance of measured attraction and passage efficiencies may differ from mathematical significance. In other words, there was evidence in both 2006 and 2008 that multiple species other than the selected 3 targeted species, move with relative ease over the Springbank dam gates. 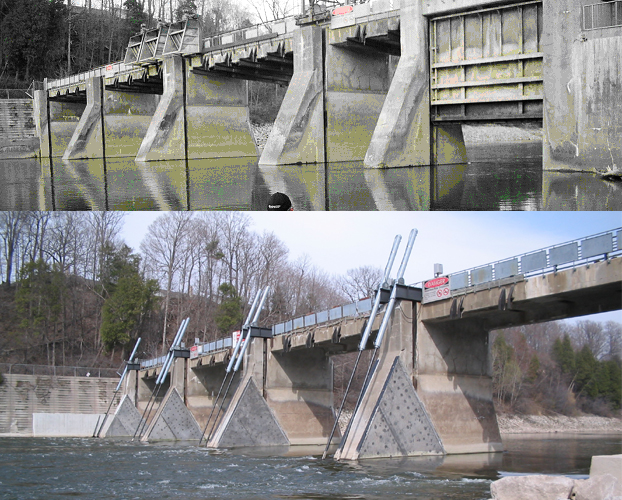 Springbank dam in 2006 pre-construction with stoplog gates (above) and post-construction of hydraulic gates in 2008 (below)
We use cookies on our website to give you the most relevant experience by remembering your preferences and repeat visits,
We do not collect ANY of your personal information. By clicking “Accept”, you consent to the use of ALL the cookies.
Opt Out.
Cookie SettingsAccept
Manage consent