In 1997, we began studying greater redhorse (Moxostoma valenciennesi) spawning habitat, spawning behaviour, fecundity, egg and larval development, as well as post-spawn movements and habitat use. We continued this work into 2006 with a 6-year radiotracking and underwater videography study of redhorse in the Grand River.
Cooke, S.J. and C.M. Bunt. 1999. Spawning and reproductive biology of greater redhorse (Moxostoma valenciennesi), in the Grand River, Ontario. Canadian Field-Naturalist. 113: 497-502.
Abstract

Reproductive ecology of the greater redhorse, Moxostoma valenciennesi, was studied in the middle reaches of the Grand River, Ontario from 1995 to 1998. Upstream migration to a weir with two fishways was observed during early spring. Spawning began in late May, when water temperatures were above 13°C, and lasted for up to 14 days, except during 1998 when, spawning began in early May and only lasted 5 days. Spawning occurred in shallow riffle areas comprised of pebble, gravel and cobble. Videographic observations indicated that males usually remained on or near spawning riffles, while females were either attracted by the presence or conspicuous behaviour of males. Rapid bursts of snout and lip vibrations were observed in males for up to 5.7 seconds. Vibrations from one male triggered other males to follow suit. When females were present, male snout vibrations usually preceded spasmodic spawning activity among one or two females and up to seven males. Males rolled over one another and the centrally located female, while dorsal and caudal fins vibrated and broke the water surface for up to 10 seconds. Male fish were observed to consume eggs of conspecifics. The youngest fish observed spawning were a five year old male and six year old female. Fecundity ranged from 32000 to 72000 eggs per female for 7 fish between 558 and 610 mm. 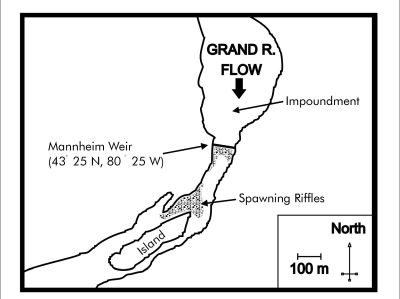