Bunt, C.M., S.J. Cooke and R.S. McKinley. 2000. Assessment of the Dunnville fishway for passage of walleyes from Lake Erie to the Grand River, Ontario. Journal of Great Lakes Research 26: 482-488.
Abstract

A Denil fishway in Dunnville, Ontario was built to provide upstream passage for walleye Stizostedion vitreum from Lake Erie to the Grand River. Modest numbers of walleye have been observed to use this fishway. Coded radiotelemetry was used to track 24 adult walleye (12 male, 12 female) downstream from the fishway to explore reasons for limited use. Activity was monitored by a fixed array of three antennas within the fishway that continuously scanned for signals from all radiotagged fish, and by mobile tracking. In April and May 1997, 17 attempts to use the fishway by radiotagged walleye were recorded. During this period, the attraction efficiency of the Dunnville fishway was approximately 21 %. Proportions of female and male walleyes that attempted to use the fishway were not significantly different. All attempts took place in the evening or at night, between 1600 and 0600 hours. Most activity occurred near midnight. Walleye occupied the first resting pool of the fishway for up to 17 h. Subsurface water velocity during the study was approximately 2 m/s. Passage rates of radiotagged fish at the Dunnville fishway were between 0 and 4.2 %. Behaviour modifying hydraulic conditions including turbulence, entrained air, backcurrents and whirlpools in fishway resting areas may delay or prevent successful upstream passage of walleye. There was also evidence of large scale movements (up to 9.6 km/d) by fish that may have spawned in the Grand River below the Dunnville dam. 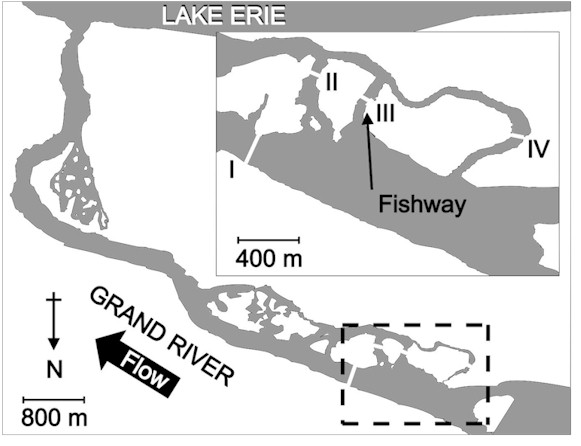